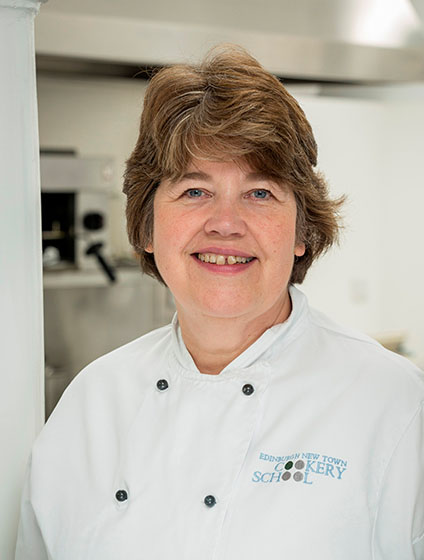 Fiona Burrell opened The Edinburgh New Town Cookery School in December 2009. Set in the heart of Edinburgh, the school offers professionals and amateurs the opportunity to study a variety of courses including three-month certificate and six-month diploma courses, as well as short themed courses.

Fiona is an expert in life skills cookery and started her career at Edinburgh’s Woman and Home Cook School in Manor Place, Edinburgh over 30 years ago. She then worked in restaurants and a small hotel kitchen before going to work as a cook for a winter season in Austria. On returning to the UK after 6 months of working as a temp chef in various kitchens, Fiona joined the world-renowned Leiths School of Food and Wine.

She left Leiths, but continued to work for them part-time, delivering many of the classes for the Leiths School of Food and Wine academy schools. She also worked extensively as a freelance consultant; writing, teaching, developing recipes, styling for food photography, leading cookery demonstrations and as a tasting panel member for publications such as Delicious. She is a frequent contributor to BBC Radio Kitchen Café and has been a judge for the Scottish Restaurant of the Year.

Fiona joined the Guild of Food Writers in 1991 and has judged various cookery competitions. She says her favourite part of the job is seeing how former students progress in their careers

Favourite thing to teach:
anything that is quite technical and also the art of seasoning

Favourite recipe to teach:
Mayonnaise (made in a bowl with a wooden spoon!)